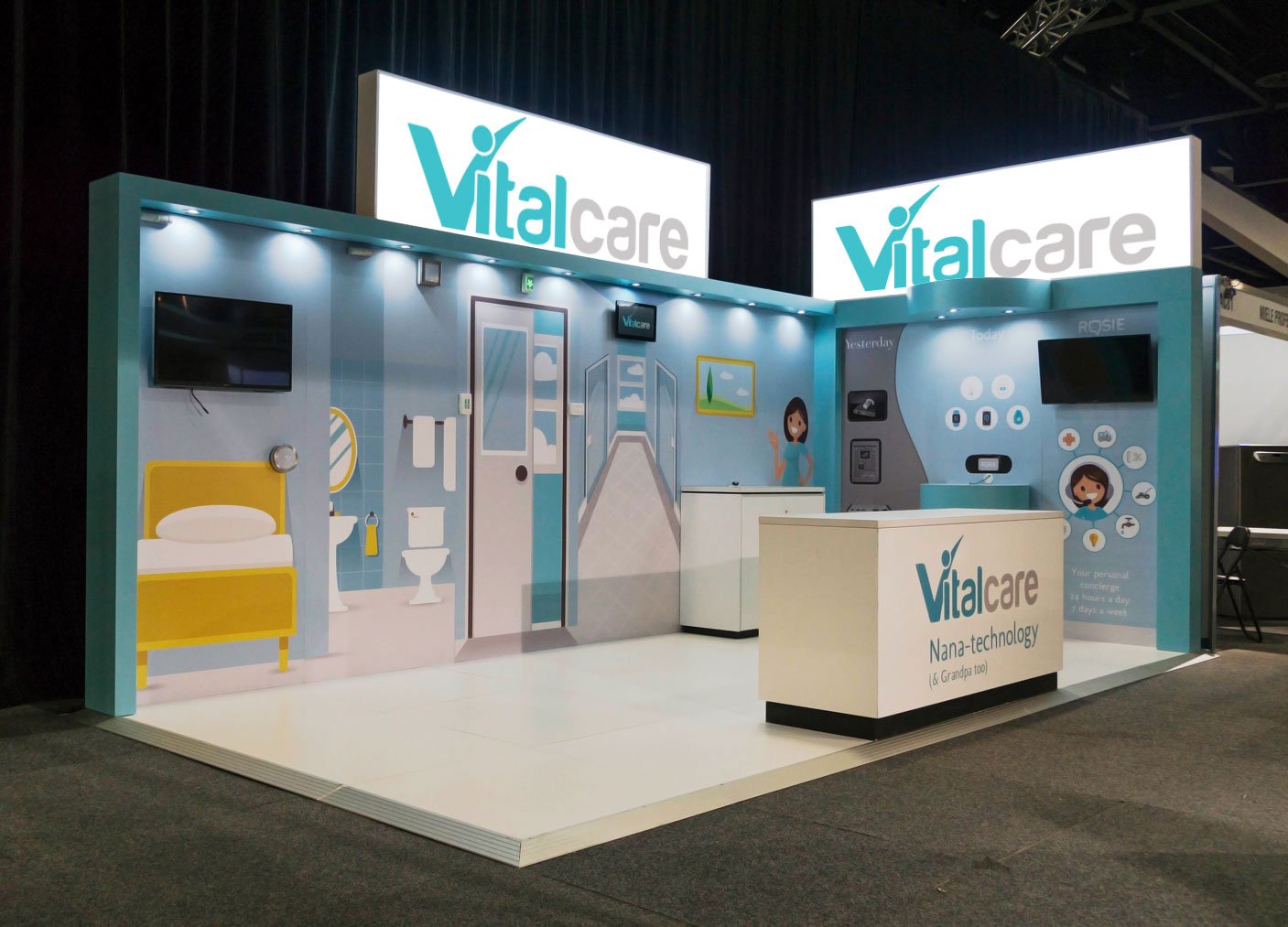 How it all started

Vitalcare first approached UCON Exhibitions in 2017 to propose a modular booth to fit in a stand space of 6m x 3m (4-sides open). They wanted a booth that could be entered and seen from all sides, they were happy with our proposal and appointed us as their stand builder for their first event. It turned out to be a success and they decided they wanted to attend another event, but wanted to see if it were possible to adjust the layout slightly – rather than try and get traffic from all sides, to focus on having one corner as the major access and visual anchor point. With that in mind, we revised the design to reuse as many of the existing components as possible and ended up with the current design. It ended up working even better for them so they decided to stick with the current layout for all events moving forward. Then it was just a matter of storage the crate between shows and bringing it back out for each for event.

Expansion from Australia to New Zealand

Prior to covid-19, exhibitions were one of our clients key revenue and lead generators for their business – in 2019, Vitalcare exhibited over 3 events that year and even expanded to New Zealand. They ended up commissioning UCON Exhibitions to build another identical booth and have this freighted over the New Zealand. The same with the Australian booth, a storage crate was produced to keep all their stand components safe for storage and for freight movement. The New Zealand booth stays in New Zealand (so far it has been reused twice, once in Wellington and once in Hamilton). The Australian booth has been used over 9 times across the different states of Australia (Sydney, Melbourne, Adelaide, Brisbane and Gold Coast). 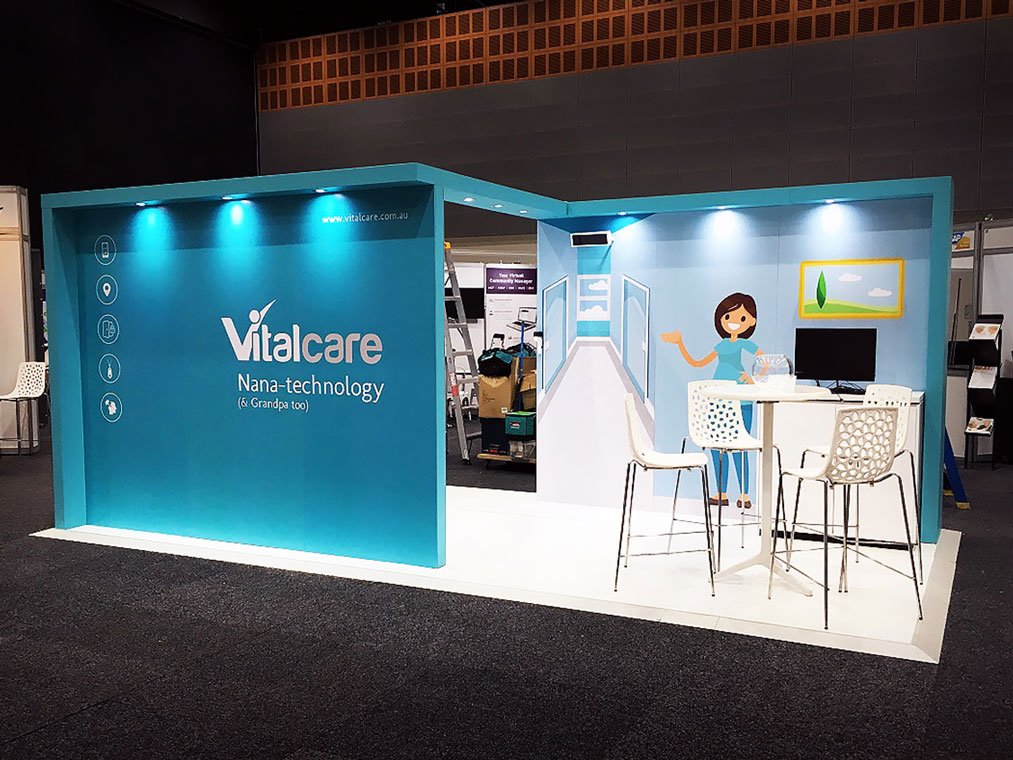 Modified first booth to fit into a 6×3 corner configuration (2-sides open). Worked out to be a much better layout and Vitalcare decided to keep this as their final booth layout and reuse at all events. 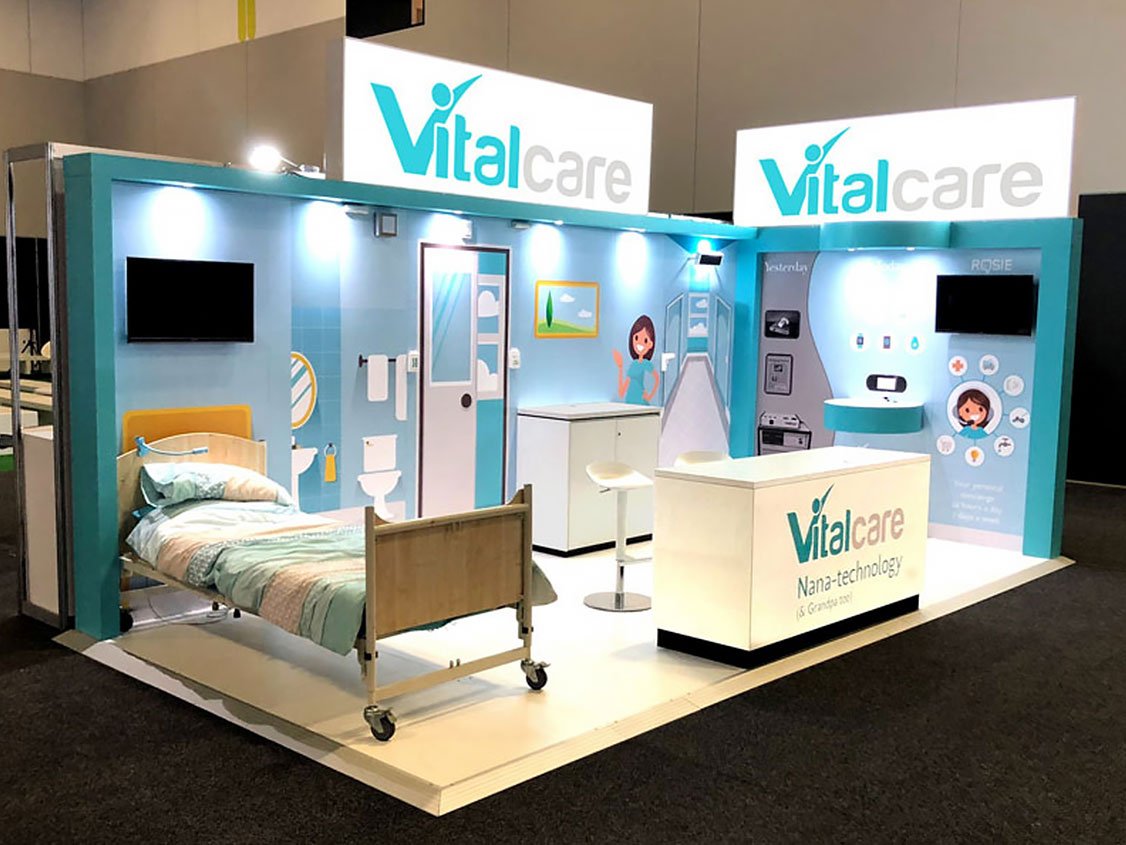 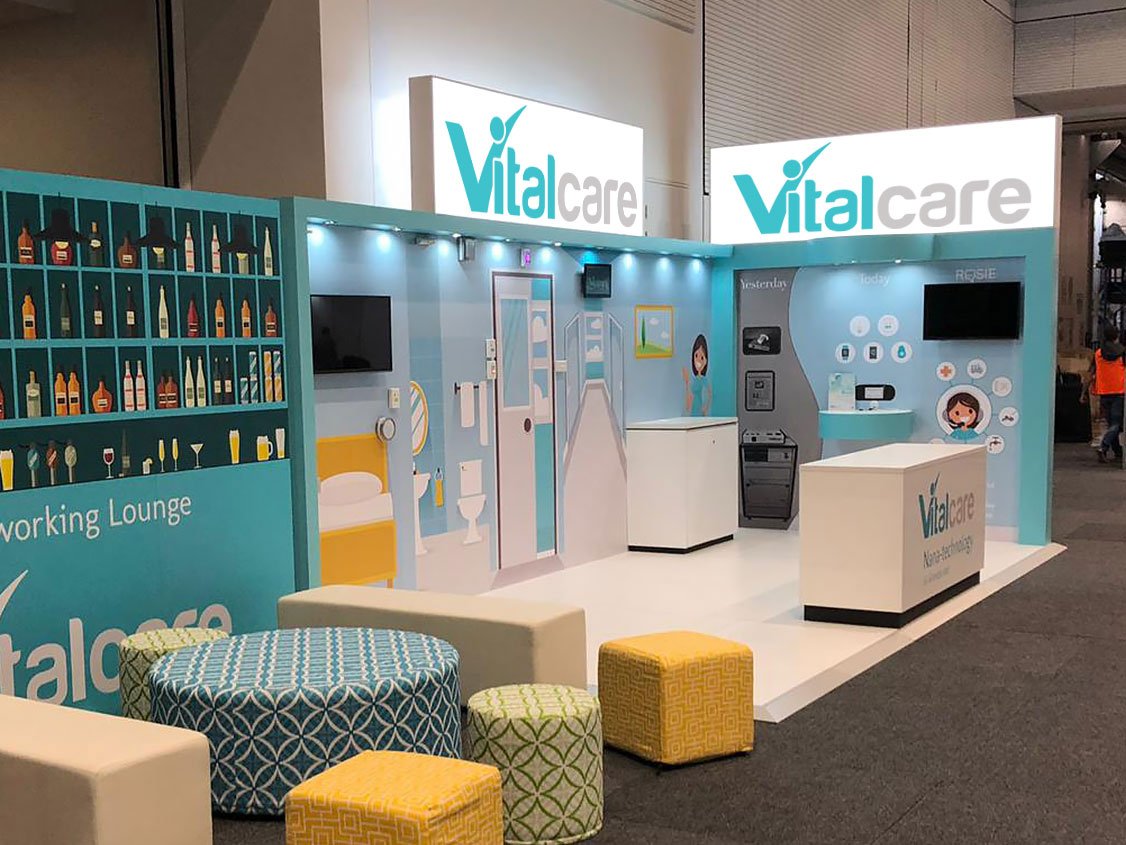 IT in Aged Care – Adelaide

Since Vitalcare was a sponsor at this event, they had additional space with seating on the left, therefore they took this opportunity to keep the booth as open as possible (without any furniture).

New booth that was built in Australia then freighted to New Zealand. Since the Artwork panels are interchangeable, Vitalcare decided to update part of their graphics to showcase their new products. 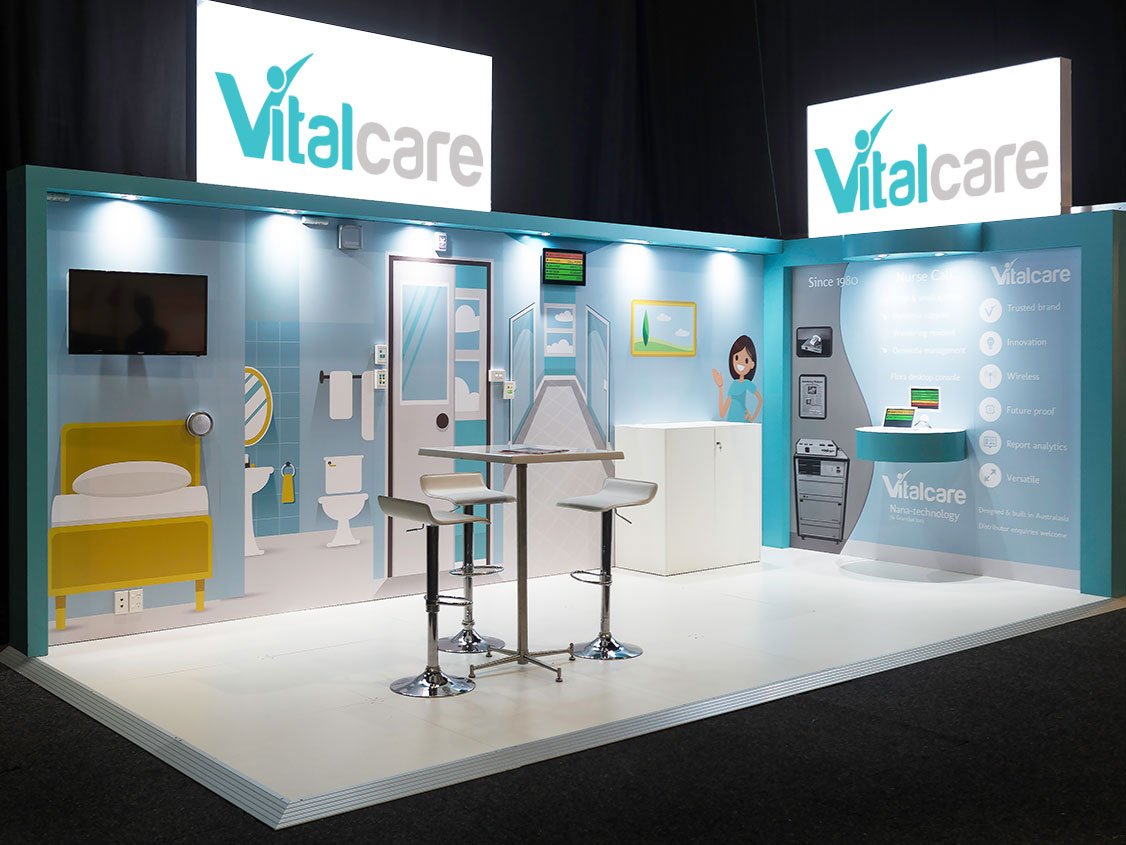 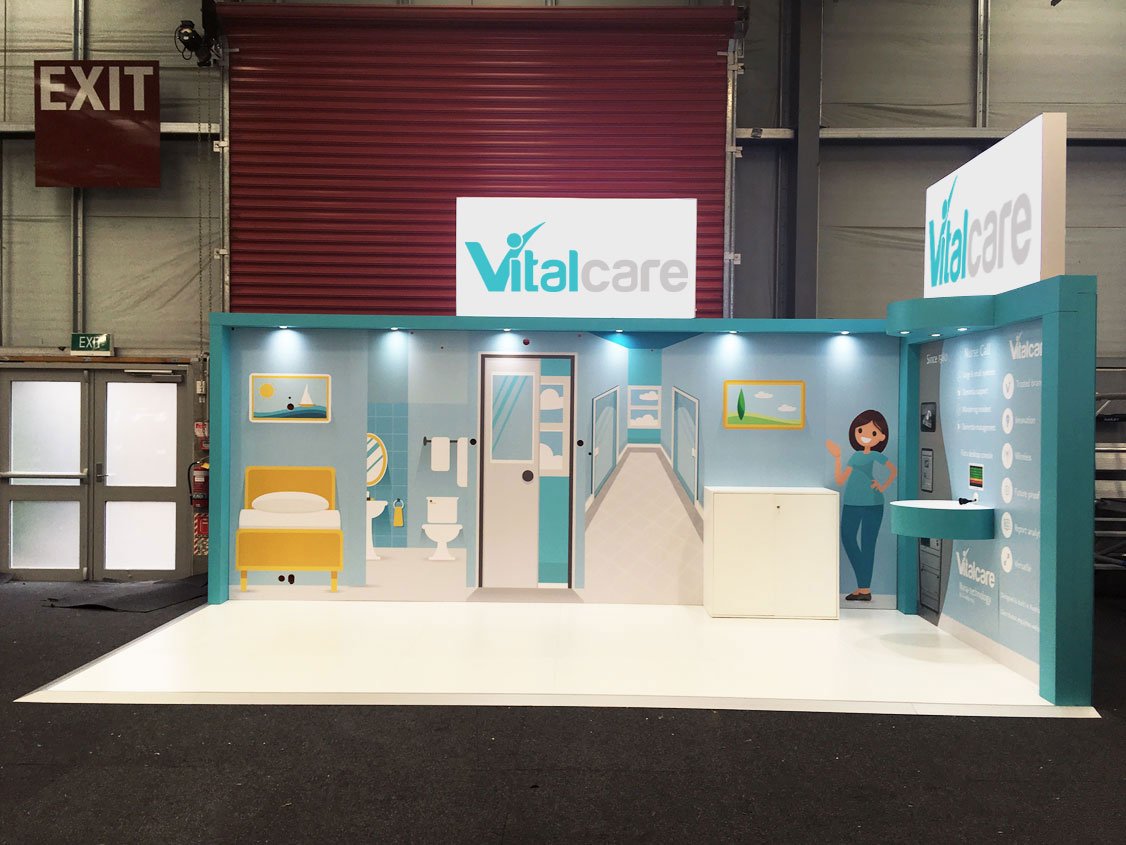 Sometimes Vitalcare decides to hire our high quality poly reception desk, it helps visually complete the booth and helps control traffic flow so visitors approach the desk as their first point of contact. 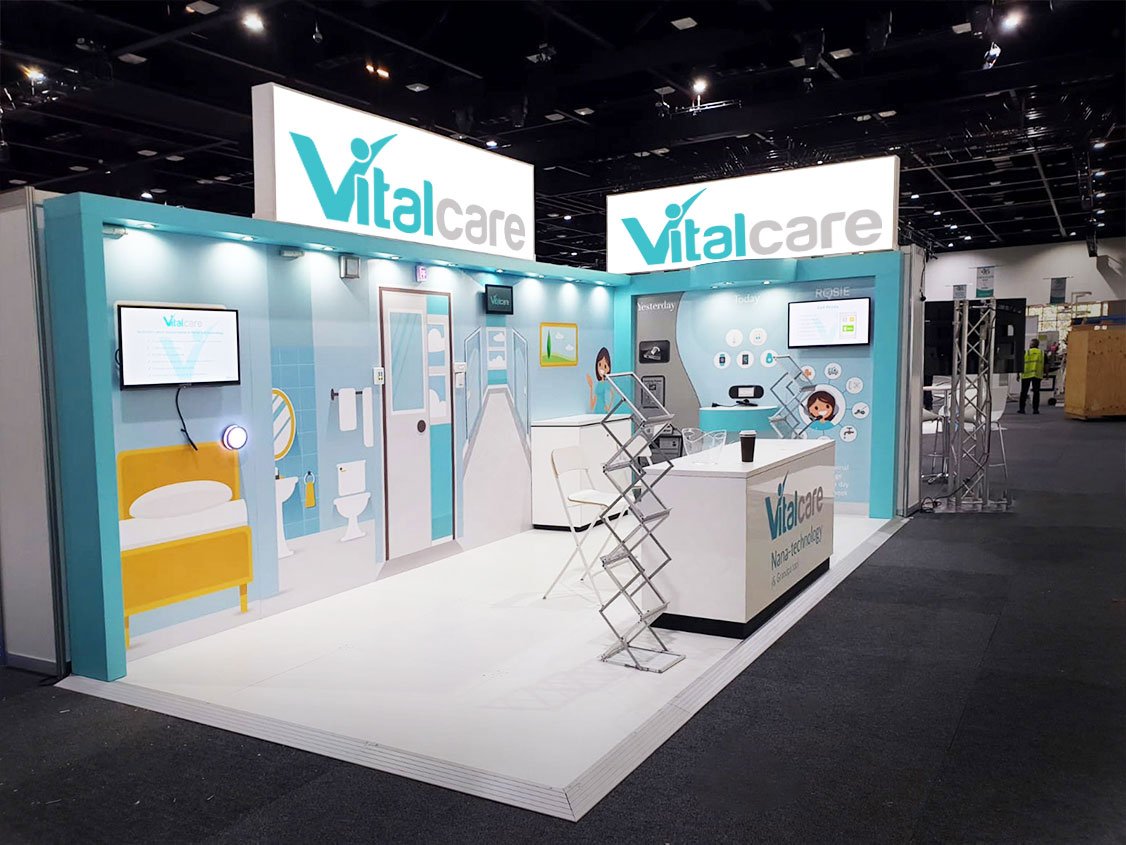 We have maintained to be as careful as possible when moving stand components to maximise their use without the requirement for any refurbishment. So far, no refurbishment has been required.

IT in Aged Care – Brisbane

Since the location of this booth was on an angle and not directly against a back wall or next to another booth, we suggested to cover up the back of the walls so even if visitors walk around the booth, Vitalcare branding will still be visible and maintain its professional aesthetic. 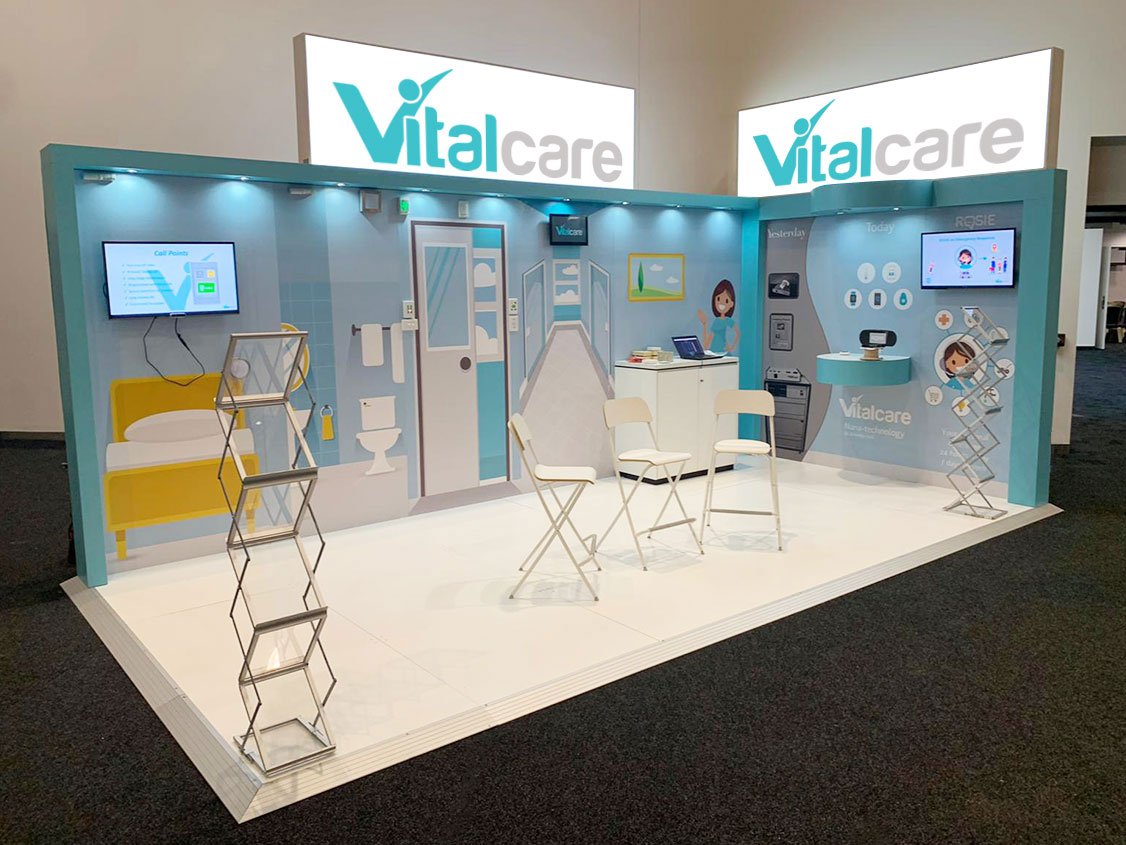 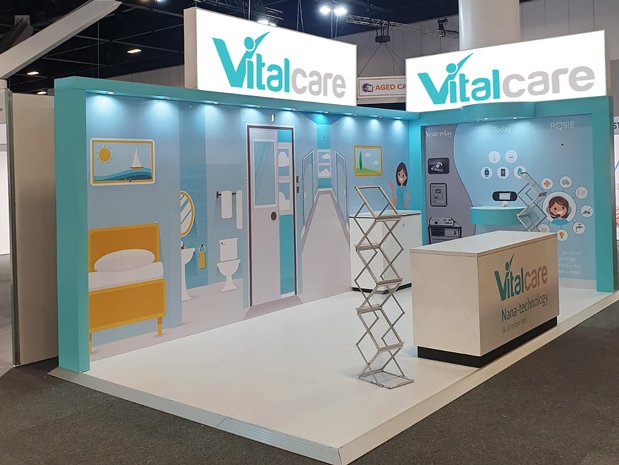 This is the 7th time reusing this booth and it is still going strong, only showing very minor marks which does not affect the overall appearance. Roll painted finish is purposely used so that if there happens to be any marks after the booth is installed, we can easily cover it up directly onsite.

How We Make it Happen

"I have no hesitation in recommending Rick and the team at UCON.

UCON has been designing and installing our trade show stands for years now and they have always gone without a hitch – both in Australia and New Zealand .

It is probably the only element of trade show planning that we don't have to worry about!

Exhibitions are about trial and error, you have to give it a go and evaluate to see if there is potential, if it doesn’t work out as you expected then try something different and Vital Care did just that. Their first configuration was not optimised so they decided to change it up a bit and that did just the trick. Planning ahead pays off, make one custom booth and stick with it – no need to rebuild a new one for each event (works out much more cost efficient when you plan to exhibit several events per year). Vital Care even expanded to New Zealand with the exact same booth. Yes you will have to commit to a certain booth location which you’ll need to book for each event, but as you can see from this case study that was not an issue with our client. Of course everyone has their own requirements and expectations, the team at UCON Exhibition are ready for work out solutions for you – get in touch today!

A custom built stand is always on brand. Be memorable. Be yourself. Be successful at any event

Turnkey and Tool Free - Ask about a portable stand, designed for easy transport and assembly